5 Tips for Bicycling in Groups 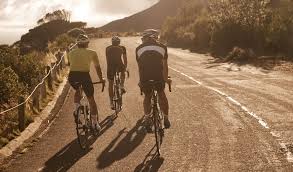 Bicycling with friends and family is one of the real joys of cycling generally and one of the significant benefits of riding an electric bike specifically.

There is a real sense in which recreational bicycling is a social endeavor. It is an opportunity to get outside, get exercise, and spend time with folks you care about.

For example, imagine its Springtime and your grandchildren have come over for the weekend. Rather than staying in the house while the kids play video games, you can get out, ride to the park or bike a nearby trail.

Also, you can use bicycling as a way to meet new people. You could look at MeetUp or a similar site to find local cycling groups in your area. You might sign up for a ride and be introduced to many interesting and active folks. It is a great way to make friends.

What follows are five tips for riding your conventional or electric bicycle in a group.

No. 1: Learn from Other Riders

There is a significant difference between riding with family members, say your kids or grandkids, and cycling with a group from MeetUp or similar.

Your family members are far more likely to be forgiving, but could, frankly, be less safe. While a group of adult riders may expect you to follow cycling etiquette to a least a minimal degree. With this in mind, it can be a good idea for relatively less experienced group riders to spend some extra time at the back of the group, watching how other riders behave and asking questions.

For example, it is very common for relatively large groups of cyclists to ride two-by-two, keeping your front wheels and handlebars in line with the rider directly next to you.

In a large group of riders, you also want to stay about three-or-four feet behind the bike in front of you to allow room for braking. As you’re riding or, perhaps, before the ride starts, explain to your companions that your new to group rides and ask for advice.

Relatively smaller groups of riders may go single file in high traffic areas and bunch up when the trail or road is clear. Even in these much more casual group rides, it is a good idea to watch and learn.

No. 2: Be Smooth and Predictable

When you’re riding a conventional bicycle or an electric bike in a group, you want to be as smooth and predictable as possible. So do your best to avoid sudden movements, don’t overreact to hazards like parked cars or potholes, and keep up with the group, smoothly matching everyone’s collective pace.

Electric bikes can be a huge help when it comes to keeping up with a group. “For many people, electric bikes make it possible to spend more time having fun with friends and family members, allowing them to join in on recreational bike rides. If you’re new to cycling or struggle to keep up, an electric bike may be the key to getting out more often to enjoy leisure rides with those you love,” explained the authors of “The Complete Electric Bike Buyer’s Guide.”

“The assistance provided by the electric motor enables ebike riders to go further than they might otherwise be able to. The amount of effort required to cover 10 miles on a conventional bike, for example, can carry riders closer to 20 miles when combined with the power generated by an ebike motor,” the buyer’s guide continued.

In this way, electric bikes make it possible for anyone to safely and easily take part in fun, group rides.

No. 3: Pay Attention to Your Environment

Riding in a group can make you less aware of the road around you. Sometimes you will get lost in great conversation and other times you might become too focused on the wheel in front of you.

As you ride, pay attention to your surroundings. You want to be able to see and avoid potential hazards and you want to recognize and, perhaps, anticipate when your companions will move and brake.

No. 4: Take Your Turn at the Front, If it is that Sort of Group

Seasoned cyclists often ride in groups because it can be faster and easier. Bicycles moving together in a pack benefit from drafting and reduced wind resistance.

Here is an example. Imagine you are riding with a group of recreational cyclists who are pretty serious about taking turns at the front. The group is riding two-by-two. You take the front position, which is in the first row on the left-hand side (like the driver’s side of a car in North America).

You might stay at this front position for about five minutes. Then the group will rotate. The rider to your immediate right and the entire right column will fall back. You would shift to the right (think passenger side of a car), and the rider who had been directly behind you would move up to the front position. Every five minutes the group would rotate again.

Be very careful at the front when you ride an electric bike. You don’t want to increase the pace just because you have a motor helping you out. Rather, pay attention to the group’s average speed when you are in the middle or the back of the column and maintain that pace if you ride up front.

With some groups of riders, this sort of rotation will be common, while other groups won’t care in the least. Just be ready to take a turn at the front, if that is what your cycling group expects.

No. 5: Communicate about Traffic and Hazards

When you are at the front of the group, you will have a somewhat better view of the road and the surroundings than riders in the middle of the pack. So it is your job to communicate with the group about upcoming turns, parked cars, and slippery spots.

You can do this with your voice and with hand signals. For example, putting your left hand on the left side of your lower back could indicate a hazard ahead on the left.